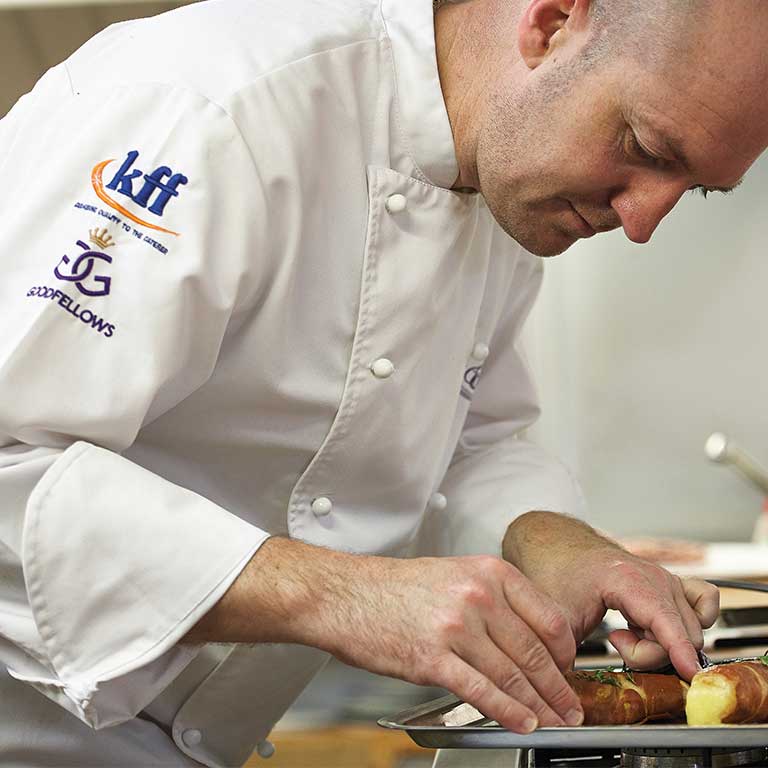 At the age of 16 I started my chef career working in pubs. I would work in local, independently-run places and would help produce everything from homemade game pies to traditional roast dinners. After a short spell working within various pubs, I made a rather exciting career change and moved into location catering!

I travelled anywhere across Britain and Jersey, depending on where filming took place, working on productions like Lock Stock and Two Smoking Barrels, Snatch, Spooks and Sexy Beast as well as on music video sets for Lenny Kravitz, The Spice Girls, All Saints, Oasis and Ocean Colour Scene to name a few. As a team, we produced breakfast, mid-morning breaks, lunch, afternoon tea and evening meals for the whole cast and crew, which could be anywhere between 50 to 350 people if there were extras as well!

Next, I joined a chef agency to see the sort of different places it might take me. These included an aerospace engineering company and the former BT head office in South East London, catering for the directors.

I working on productions like Lock Stock and Two Smoking Barrels, Snatch, Spooks and Sexy Beast as well as on music video sets for Lenny Kravitz

After my time working with the chef agency, I became the head chef of West Lodge Banqueting, producing food for up to 800 people per day. Functions included weddings, Masonic evenings and the Magic Circle. There I prepared menus and was in charge of a team of 10-15 chefs.

In between my various roles I have also worked for Chigwell Police Club, catering for silver service charity events for up to 1000 people at a time, Club Kingswood Health Club, the only health club to have won the South East Health Club of the Year for two years running, The Prince Regents Hotel, London and last of all the Abridge Golf Club, Essex.

Here at kff, I look after our team of Area Sales Managers in and around London, ensuring they are always delivering the high level of service our capital’s caterers deserve! I take any opportunity I can to jump back into the kitchen, regularly appearing behind the counter with Tony to keep visitors fed at the various shows and exhibitions we attend throughout the year, such as The Restaurant Show.